I knew when I left home that I would lose some things. I would lose my apartment that I loved and considered my home. I would miss loved one’s birthdays, Thanksgivings and maybe Christmases. I wouldn’t get to see my friends whenever I wanted to nor spend Sundays with my family at my parents’ house. I wouldn’t get to explore relationships as they could have been, knowing there would be this endpoint. I would miss Northeast Ohio in the autumn when everything was cozy and the light was perfect and then again in the spring when the world came alive and the earth smelled like blooming.

I also knew that when I left I might never see my dogs again – those two big black Newfoundlands that were all heart and fur; that my goodbye pet and kiss (a lick on their side) when I left might be the final one. Unfortunately, for one of them, it was.

We picked Sadie up down near Cincinnati, Ohio nearly nine years ago. She introduced herself to us was standing up on the baby gate that led to the kitchen, a massive nine-month old dog that was all energy and sass and almost taller than I was on her hind legs. She spent that introduction chewing playfully (I think it was playfully?) on the ears of Duke, the biggest Newfoundland I have ever seen. Sadie could have cared less about his size. She was in charge and she knew it.

She had a difficult first few months of life, being shuffled from one home to another of two families that each decided they didn’t want her for reasons unrelated to the kind of dog she was. However, their decisions were lucky for us for she was quite perfect for our family and my mother and I took her home that evening. She crawled up immediately from where we placed her in the back of the SUV and into my lap, where she remained for the four-hour car ride back, my big puppy and I.

Her nickname quickly became ‘Bossypants’ and ‘Sassypants’ because she was always demanding something (even though she never wore pants, so the naming convention was a bit curious). She was way too intelligent for her own good and stubborn as hell, which was a formidable combination for a dog of her size. She bossed around our bigger Newf Benny like she had with Duke, chasing him around the yard and grabbing onto the back of his neck in play. He was bigger, but she was faster and more agile so she won nearly every bout. I don’t think Benny cared – well, not too much anyway. 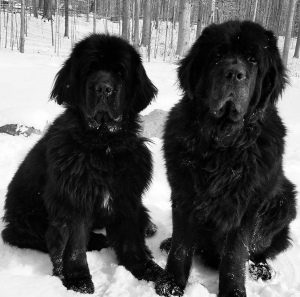 She never wanted to be left out of the conversation. If you were talking, she would join in, though what she was trying to contribute we rarely knew. And if she wanted something, there was no peace until she got it. A ‘no, lay down’ was returned with a series of grumbles and rebuffs that would have made a defiant teenager blush. If you ignored her, she would find a way to get back at you as I knew from a destroyed rolling pin, a chewed up hairbrush handle, a de-potted orchid (which she tore through the house with after finding that everyone had closed the door on her, leaving a trail of soil and flower petals in a disheveled trail) and even a book on Newfies. She was lucky she was so cute.

When she was six, my brother, who was a medical student at the time, was petting her and discovered that she had very enlarged lymph nodes. A visit to the vet confirmed that she had cancer – lymphoma to be specific. She was given two months to live without any treatment and anywhere from a year to a few years with very expensive chemotherapy. It was a strange bit of time for our family – trying to decide which pain would be worse.

During this period I would sit with her and cry when no one was home, knowing that she didn’t know what was going on and that regardless of treatment, there was only so much we could do for her. I watched as she quickly got weaker, her eyelids reddened and drooped and her spunk gradually wore away. Thankfully, my family soon elected to treat her and we drove her weekly for a few months to the an animal hospital in Akron that specialized in cancer treatment.

We were very lucky – she did well. She went into remission for nearly two years, which was longer than the normal prognosis. You see, they treat dogs to put them into remission, not to cure them as they do with humans. The process is too painful and unfair to the animal, whereas the treatment to bring about remission is gentler. We were just happy to have our Sadie back. I will forever be grateful to my family – especially to my father – for pursuing this and letting her have a little more life. 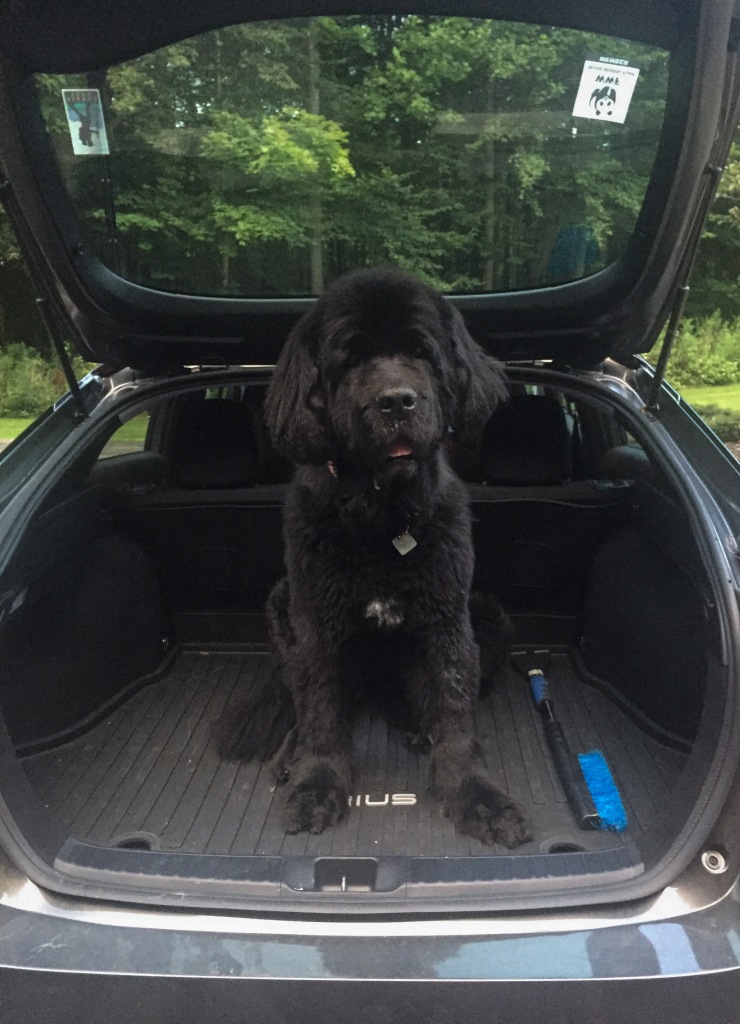 She has been having a harder time lately, despite the nonstop care and love of my family, and especially of my mother who is the best dog nurse there ever was. Unfortunately, an injury to her shoulder left her with a severe limp and her cancer has now returned, as we were told it would. She is no longer a candidate for chemotherapy, so it was only a matter of time before she would be suffering the effects of her terminal disease.

My mother called me over the weekend to let me know the time was nearing. Thanks to modern technology, I was lucky enough to have a little video chat with Sadie despite all of the miles between us. She was smush-faced and adorable as always, but there was only a little life left in her eyes. A few days later, I got to see her over video one more time and say goodbye. I told her she was a good girl, that I loved her very much and blew her a kiss from far away. She was gone within a few hours. She is at peace now.

I will remember her as she deserves to be remembered – with all of the sass and wildness in her heart. She taught me to be bolder and to speak my mind a bit more than I am apt to. She reminded me that part of life is to play and another part is to rest and that these parts are as important as the others. Most of all, she taught me about love and how it must be unconditional to be called by that name. Thank you, little girl, for all of this.

Lord Byron, the notorious poet of the Romantic movement, was once described by a former lover as, ‘mad, bad and dangerous to know’. His personal excesses aside, I will always have a place in my heart for him due to his devotion to his dog, Boatswain. Boatswain was also a Newfoundland, just like Sadie and Benny, and when he died Byron memorialized him with a touching poem that he wrote, as well as with an inscription written by his good friend. The poem is full of the dramatic language that was so popular in that era; nevertheless, it perfectly sums up what it is to truly know the friendship of a dog.

Near this Spot
are deposited the Remains of one
who possessed Beauty without Vanity,
Strength without Insolence,
Courage without Ferocity,
and all the virtues of Man without his Vices.

This praise, which would be unmeaning Flattery
if inscribed over human Ashes,
is but a just tribute to the Memory of
Boatswain, a Dog
who was born in Newfoundland May 1803
and died at Newstead Nov. 18th, 1808

When some proud Son of Man returns to Earth,
Unknown to Glory, but upheld by Birth,
The sculptor’s art exhausts the pomp of woe,
And storied urns record who rests below.
When all is done, upon the Tomb is seen,
Not what he was, but what he should have been.
But the poor Dog, in life the firmest friend,
The first to welcome, foremost to defend,
Whose honest heart is still his Master’s own,
Who labours, fights, lives, breathes for him alone,
Unhonoured falls, unnoticed all his worth,
Denied in heaven the Soul he held on earth –
While man, vain insect! hopes to be forgiven,
And claims himself a sole exclusive heaven.

Oh man! thou feeble tenant of an hour,
Debased by slavery, or corrupt by power –
Who knows thee well, must quit thee with disgust,
Degraded mass of animated dust!
Thy love is lust, thy friendship all a cheat,
Thy tongue hypocrisy, thy heart deceit!
By nature vile, ennobled but by name,
Each kindred brute might bid thee blush for shame.
Ye, who behold perchance this simple urn,
Pass on – it honours none you wish to mourn.
To mark a friend’s remains these stones arise;
I never knew but one — and here he lies.

– Inscription (in bold) by John Hobhouse and poem by Lord Byron

Boatswain’s gravestone is much larger than Byron’s, a telling tribute to his love. Sadie is buried in my parents’ backyard, overlooking a river valley filled with trees that are just starting to turn color. She is surrounded by all of our dogs that came before her. My mother wrapped her in a blanket and buried her with her favorite fuzzy ball that she would always find the squeaker in. She turned the nightlight on her collar on to give her a bit of light in the darkness. She will probably be annoyed at all of the squirrels that run above her and the deer that she could never quite catch. I will go visit her when I return home and sit with her for awhile, remembering the big puppy that laid in my lap for four hours, finally going home. 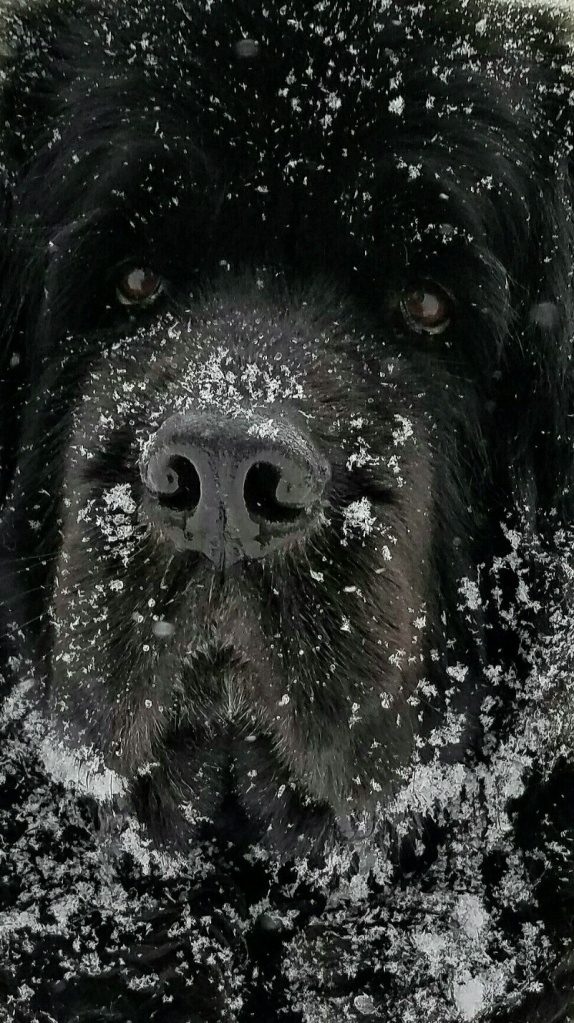 I cooked a meal that I could have shared with Sadie. You can find it here: Pumpkin & Sweet Potato Soup with Sun Toast.

My perfect idea of happiness is sharing a big bowl of pasta around a table with all of the people I love, preferably with a few enormous fluffy dogs at my feet. If I’m on the coast of the PNW or nearly anywhere in Italy, then I honestly wouldn’t need anything else. Except maybe bittersweet chocolate and deep red wine (but that’s a given). Native NE Ohioan, currently in Piemonte, Italy working on a Master’s in Gastronomy.

5 replies to BIG PAWS, BIGGER HEART: AN EPITAPH TO A DOG

Join 61 other followers
Follow MEET ME AT THE LONG TABLE on WordPress.com