“I think spaghetti carbonara is what Meryl Streep cooks for Jack Nicholson in the film version of one of my favourite books, “Heartburn”, and it is so right, for that chin-dripping, love-soaked primal feast, the first time someone actually stays through the night. Yes, I know a whole pack of spaghetti is far too much for two, but I want that whole panful lugged back to the bedroom. No namby-pamby mimsy little plated arrangement. So you’ll have leftovers? Just work up an appetite for them later.”

This is the introduction for spaghetti alla carbonara in Nigella Lawson’s Feast, one of the first cookbooks that ever graced my shelves more than a decade ago. I cannot think of – or eat – carbonara without these words highlighted in my mind. It’s a sexy and silly little thing, one that introduced me to some of the best things in life: namely the whimsy of exceptional food writing, Roman cuisine, Meryl Streep, and – obviously – the idea of a passionate, romantic love.

However, the last time I ate carbonara was decidedly nothing like the paragraph described above. What I had intended as a love-soaked dinner for two had turned into a red wine and tear-soaked dinner alone. And yes, I did eat both servings. In a bowl. At my dining room table. It was a wine, cheese and carb-laden ending to a series of dizzying romantic adventures (and misadventures) that had begun with my engagement’s end a year and a half prior (just in case you are wondering, I had eaten pasta alla vodka that fateful night (or rather, pasta alla gin, as I didn’t have any vodka, but my pasta was damn well going to have alcohol in it)).

In the many months since my engagement ended, I have dated a number of interesting men, the last ending alla carbonara as noted above (fun fact, carbonara means charcoal burner, so since my love life felt like a pile of ashes rather than aflame, this pasta was extremely fitting). As I’ve always found, no matter where the fault lies, endings are difficult. Especially since in most cases – as it was in this final one – the fault really didn’t lie anywhere. There is no villain in this piece – neither he nor I were to blame; sometimes things just end and we have to cry, eat two bowls of pasta, pick up the pieces and start again. 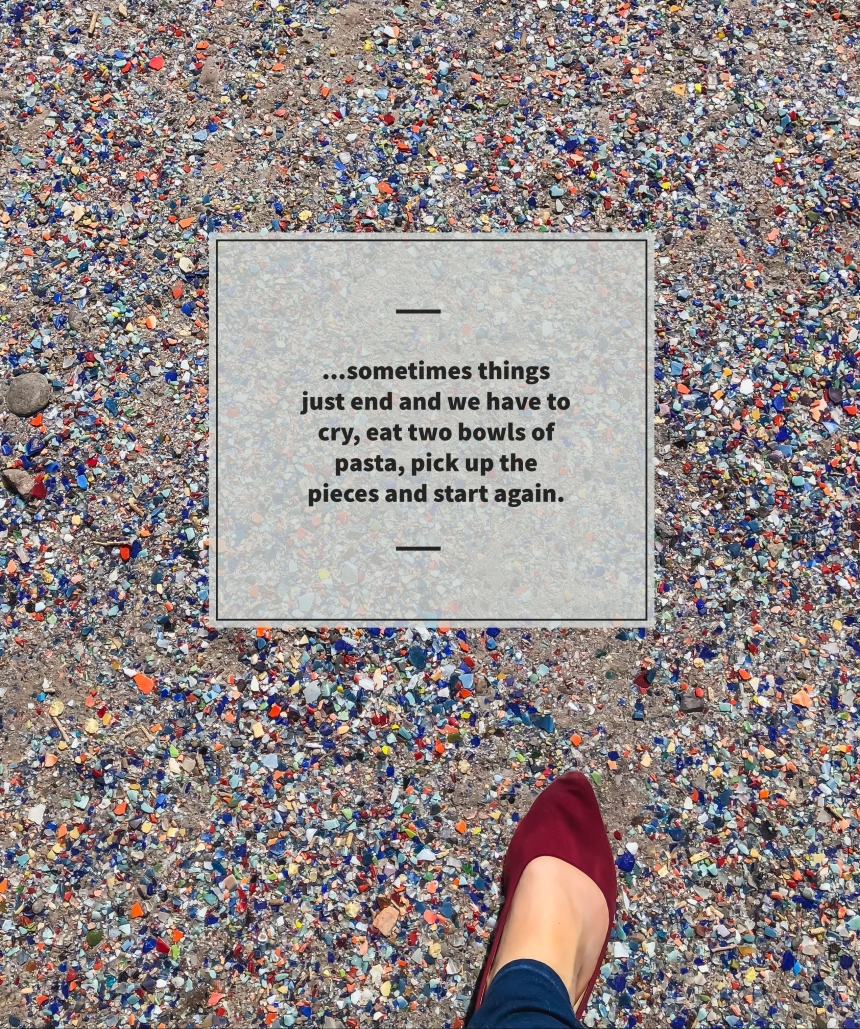 Over the course of these eighteen months I’ve reveled and I’ve raged; I’ve been intoxicated by first kisses and their bittersweet final counterpart; I’ve run the gamut of emotions from the most brilliant that set me aglow to the lowest that left me heartbroken. I’ve sometimes even drifted into bitterness, but I’ve discovered that those negative feelings are completely exhausting, ultimately defeating and, quite honestly, simply an incorrect perspective on the full spectrum of love I was experiencing.

Shortly after my solo carbonara night, I had a telling conversation with a close friend. She has been through the dating ringer even though she is one of the very best humans I know – incredibly smart, beautiful, hilarious, successful and with an enviable knowledge of IPAs. When her last relationship ended and she couldn’t figure out why, she began to blame herself. They all leave, she told me, so it must be me. Her words were a sharp knife in my gut, as I had said the exact same thing to our mutual friend the day before.

That’s when I got it. It wasn’t her. It wasn’t me. It also wasn’t (necessarily) the men we were seeing. These just weren’t, for whatever reason, the right relationships for us at that moment in our lives. However, the experiences weren’t lost time either, not even a little bit, as I had gained something important – sometimes just a small personal realization, but more often a more profound understanding of the complexities of love and human connection – from every single one of them.

I discovered one more thing from our conversation: these romantic relationships that I was putting so much time, investment and energy into were not the most important of my life – not even close. I realized that the best moments of love that I’ve ever experienced in my life have been small moments, tiny inkblots of time in my story – and only a few of these have been romantic. Most of them come from friends, family, and often even from myself. Each instance is small enough that it can be encapsulated by the upturn of my lips into a smile at an unexpected compliment, the warmth that comes from an unanticipated kiss (from a person, or, all the better, a large fluffy dog), or from laughing at my own beautiful absurdity.

I’ll share a scattering of them with you now – these little moments are among those that have been the mesh of my life for the last eighteen months – little bits of brightness that warmed my existence and, in essence, made it.

It’s burying your head into the dark black fur of a semi-uncomfortable but still lovingly loyal Newfoundland (especially one named Sadie or Ben).

It’s an old friend thoughtfully preparing something vegetarian to eat just in case you can come over for dinner that night.

It’s forgiving and befriending your ex-fiancé and turning all of the love that you thought was lost into something new and different, but still beautiful.

It’s your mom calling to check on you before work every morning – the grown-up version of the much missed lunch box note.

It’s enjoying the company of an endearing archaeologist at the Trevi fountain at 1:30 AM on the most perfect summer night in Roma.

It’s twirling around to Camila Cabello all alone in your kitchen while drinking (just a tad too much) wine and falling on your ass and then laughing about it – and then getting right back up to dance again.

It’s your wonderful sister-in-law calling to check on you on that one day when you really need a friend, but didn’t want to ask for one.

It’s tramping around Bologna for hours laughing until your stomach aches with a tall and handsome Sicilian who insists on showing you the seven secrets of the city (or at least those that are still open).

It’s a co-worker hearing about your future plans and telling you that you are amazing – on a day that you feel like the worst person on the planet.

It’s your Auntie taking you out for lunch and lovingly listening to and encouraging you as she’s done your entire life.

It’s sitting outside at a wine bar at midnight in Milano across from a man who reminds you of sunshine and warm laundry when your fingers touch for the first time – and you both briefly forget how to speak and can just smile foolishly at one another while you trace each other’s palms.

It’s your dad taking you on a trip to somewhere you’ve never been because he’s noticed that you needed a bit of a lift.

It’s a co-worker buying you a tiny stuffed animal because you finished a major deadline at work.

It’s baking into the late hours of the night, when the world is quiet, the oven is warm and your tiny apartment is filled with the ever-comforting aromas of butter, brown sugar, and vanilla.

It’s letting someone you love walk away because the timing and circumstances just aren’t right, even though doing so makes you come apart for a little while.

It’s being so very proud of your brother for working hard and accomplishing exactly what he wanted to.

It’s slowly drinking a bottle of wine cuddled on your couch with a hot farmer while he shares his favorite music with you and makes you giggle by vividly illustrating how he once won a storytelling competition with a tale about a goat on a rope.

It’s your best friend sending you the most ridiculous memes on Instagram when she knows you had a bad day.

It’s a neighbor bringing your flowers when she sees you crying in your car after a particularly overwhelming week.

It’s a monthly trip to your favorite Ethiopian restaurant with a lovely coworker where you swap stories and support and laughter.

It’s your sister-in-law’s mom giving you a book on a subject you love for no reason at all.

It’s learning something new that lights up your soul, like the difference between tree species or how birds communicate with one another.

It’s exploring the cobbled streets of Rome with brilliant new friends whose company warms your heart.

It’s ending a relationship that just isn’t working for you, even when you still really care.

It’s your boss giving you unasked for (but sweet) advice on your love life because he treats you like his daughter.

It’s your two oldest and best friends making you the most amazing dinner in your apartment for your birthday.

It’s cooking with your family and friends – and sharing these meals and enjoying the delightful laughter and stories that accompany them around a long table on scattered perfect evenings throughout the year.

It’s choosing to love – always. Everyone and everything. Whether or not they ‘deserve’ it. Whether or not they can give you anything back – family, friends, lovers, strangers, animals (especially those animals) – and yourself. Because it’s the only way I really know how to live.

The Italians have two ways of saying ‘I love you’ – ti amo and ti voglio bene. Ti amo is all about romance – those big, passionate love moments. But ti voglio bene is for the rest. It means ‘I want what is best for you’. This is real love guys. Soak in the moments. The big ones are wonderful, but they are often few and far between. The little ones though, the ti voglio bene moments – they are everywhere – and these are only a few of mine. Be sure to store them up like sunshine for your cloudiest and gloomiest days.

You can date one person, ten, or a hundred (more if you are really ambitious (where do you get your energy?!)). Maybe we’ll all eventually find the right one, maybe we won’t. Maybe we will and then it will end and then we’ll find another one. Who knows. I sure as hell don’t – but I’m surrounded by love. Everyday. From everyone and from myself. And that’s enough.

Thank you for the little moments of love – all of you. They mean more than you could ever know. I hope I gave some back to you, even if it was just a big bowl of pasta and a laugh around my table.

(If you want carbonara after all, you can find my recipe here: Ramp Carbonara Vegetariana…)

My perfect idea of happiness is sharing a big bowl of pasta around a table with all of the people I love, preferably with a few enormous fluffy dogs at my feet. If I’m on the coast of the PNW or nearly anywhere in Italy, then I honestly wouldn’t need anything else. Except maybe bittersweet chocolate and deep red wine (but that’s a given). Native NE Ohioan, currently in Piemonte, Italy working on a Master’s in Gastronomy.

2 replies to LOVE AND GRATITUDE (AND PASTA)

Follow MEET ME AT THE LONG TABLE on WordPress.com